What's a Gunrock, Anyway? And What Does He Have to Do with the UC Davis Aggies? 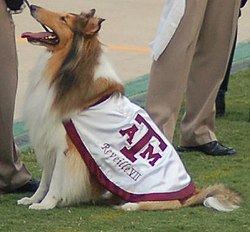 Well, let me ask you this. What is an Aggie? If you were going to design a costume of an Aggie, what would it look like?

Ah-ha! Gotcha. (That’s okay. The geniuses over at Texas A&M – the other Aggies – couldn’t figure out what an Aggie looked like either, so they recruited a collie dog and named it Reveille – see pic to the right.)

Our forefathers and mothers here at the Ag Farm, as it was known in the old days, got a little more creative. Recognizing the futility of trying to embody an Aggie, they chose the wild and noble mustang as their mascot. Then, in a 98% winning vote, they named it after a famous thoroughbred stallion that was standing stud on the campus at the time. Gun Rock (see pic below) was the French-born son of Rock Sand and Gunfire, and a close relative of the famous American race horse Man O’ War. Upon breaking down in France due to over-training, Gun Rock’s owner donated the horse and his impeccable bloodlines to the government to breed mounts for the US Army Cavalry (remember, it was the ’20s). He lived happily on campus for several years before he was moved to a facility in Utah. Upon Gun Rock’s death in 1932, he was described by a reporter with the California Aggie as, “a beautiful animal with class and breeding evident in every line.” So a mustang named after a thoroughbred called Gun Rock was our mascot until the 1970s when an unfortunate decision was made to rename the mascot Ollie. There was a further attempt to make our mascot a cow. {Shudder.}

Fortunately, cooler heads prevailed and in 2003 a blue mustang named Gunrock (with amended spelling) was re-introduced as the UC Davis Aggies’ mascot. Today, Gunrock can be spotted at UCD events and sports meets, hugging children, posing for photos, handing out lollipops, and clowning with the Band-uh.

So the next time you’re at a game, or the Pajamarino, or Picnic Day, and you spot Gunrock, give him a high-five, say a quiet word of thanks for that beautiful racehorse with the aborted career who found his way from France to Davis, and be grateful that our school mascot doesn’t look like Lassie.